She sits with an air of reflection, a tea in one hand, staring into the moon over the Gulf through the window. Next to her are two books, one titled Iranian. The second one is opened – and on a fresh page she has written down and underlined the word “Africa”.

It is a scene from Siyaa Zibaast (Black is Beautiful), an animated short series. The woman depicted is Khyzran Khanum, a 22-year old who was kidnapped from Tanzania and sold as a slave in Iran in the mid-1800s.

Despite being told to remain home, Khyzran hears from another enslaved woman about the potential of petitioning for her freedom. British records from the port city of Bandar Lengeh show she fled, and sought out freedom by pushing for her emancipation. However, there are no records to show what came of her story.

The animated series is one of many works that will be featured by the Collective for Black Iranians, a newly launched group which focuses on amplifying representation of Black and Afro Iranians – something that is long overdue, explains the founder, Priscillia Kounkou-Hoveyda.

“When we process the idea of being Iranian, we should also be able to envision Blackness and Africanness as being a part of it, because it is,” Kounkou-Hoveyda says.

The collective is held by three pillars – amplify, educate, advocate.

“The idea is to emphasise stories of Black Iranians, stories of people who come from cultures between Africa and Iran, and Iranians of African descent.”

Kounkou-Hoveyda was born in France to a Congolese father and an Iranian mother, and spent her childhood between Tehran and Isfahan during the Iran-Iraq War.

Kounkou-Hoveyda has vivid memories of the bombardment. She remembers “running to the zirzamin [underground], staying there for hours while my grandad read the Quran so that the bombing stops”.

She now recounts those memories when speaking to child soldiers, working to facilitate their release as part of her work with UN and non-governmental agencies in Africa.

The collective is a side project and a “labour of love” she has launched with five others spanning four different countries.

Literature, short films, music and photography, all by the perspective of Black Iranians will be shared on the platform as well as an education campaign on topics such as Iran’s history of slavery – which was abolished only in 1929 – and the representation of Black people in Iranian society.

We are part of the tapestry of what it means to be Iranian. If you look closely, you will see us

🎨: the Collective for Black Iranians © with Mina Jafari pic.twitter.com/0aqUlGuvsS

Most recently, it featured material exploring the rarely discussed 10th-century migration of Iranians to the Swahili coast. Along with creating a shared culture, it is thought to be responsible for Persian architecture in Africa.

“[The collective] is the desire, determination to show the beauty of our Blackness in our community. And if we are accepting and celebrating it, we are able to decrease anti-Blackness sentiments in the Iranian diaspora.”

That racism, Kounkou-Hoveyda has described as a “different kind of war” she has faced, from friends, strangers and even Iranian relatives.

“I wish these conversations had happened 20 years ago, so that it would have informed the people who told me to eat more sabzi [herbs] because it’ll make you white, or the people who rubbed my skin a little stronger,” she says.

“And this is not an ignorance that’s limited to Iran, I experience otherness when I go shopping in Iranian markets in America,” referring to the constant questioning of her Iranian heritage.

“I believe that if we build education around it, we might not completely solve it, but we can start conversations about it.”

The education portion is spearheaded by Beeta Baghoolizadeh, assistant professor of history and Africana studies at Bucknell University.

The greatest density of Iranians of African descent is in the country’s south. The majority are descendants of those who arrived as a result of forced migration during the Indian Ocean slave trade, while some migrated as free peoples through occupations such as date harvesters and merchants.

For nearly 10 years, Baghoolizadeh has focused her research on the constructions of race in 19th and 20th century Iran, through the lens of slavery and abolition.

“The process of abolition was really one of erasure,” Baghoolizadeh says. “Reza Shah‘s government didn’t want to talk about it after abolition, and it created this collective amnesia.”

The topic does not appear in history textbooks, and more so, she says, since there was no humanitarian effort as part of abolition, there was no attempt made to make space for freed peoples in the economy.

“There weren’t really any new opportunities given to free peoples and their descendants for upward mobility.”

Interested in getting to know Iran’s south for herself, Kounkou-Hoveyda has in recent years made several trips there.

“Every time I go I specifically spend time with Black Iranians, Afro-Iranians,” she says. “It’s a process that has been very interesting for me, in wanting to connect my African side to my Iranian side not as two entities that are separate from one another, but as two that are a part of one another.”

One of those connections was with Sarah Farajzadeh, now the group’s resident storyteller.

As an Iranian of African descent growing up in the city of Bushehr, Farajzadeh has been sharing the stories of those around her through poetry and photography on social media, where the pair originally connected.

“I’m inspired by the people around me, mostly the women, who have become heroes of their own stories despite the barriers that Black people face in Iran,” Farajzadeh says in Farsi.

“We’re going through a period of cultural change, and everyone has their part to do. I want to contribute in this way to change peoples’ perspective by showing our beauty and sharing our perspective.”

Farajzadeh says she will also be showcasing Afro-Iranian culture through music and film alongside a team of others in Bushehr – a city steeped in art.

“It’s filled with singers, musicians, actors, and artists,” she says. “It’s impossible to live in Bushehr without art being a part of how you express yourself.” 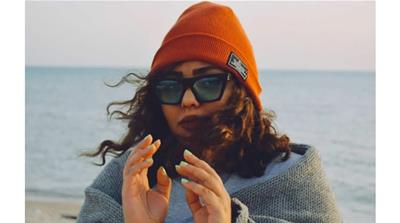 The collective Kounkou-Hoveyda envisioned came together with their friendship in Bushehr, Farajzadeh says.

It also came together through a similar connection she made, but this time in Canada. That was with Alex Eskandarkhah, of Afro-Iranian descent, and co-founder of the collective.

Eskandarkhah is a frequent voice on issues of race in Edmonton’s community and local media. His basketball scholarship is what brought him there from Toronto, and also led to a stint playing semi-professionally in Iran.

“Conversations have been happening without us, so it’s a matter of time this collective came out,” Eskandarkah says.

“We challenge but it’s necessary. We need to be starting healthy dialogues to take us away from these fixed mindsets,” adding that he is big on dialogue, naturally so, as the co-host of the podcast Gifted Gab, exploring topics of trends and culture.

He starts most episodes giving a shoutout to his family business, Kashan Persian Rugs. But his favourite episode is one hosted with his brother back in June, where they touch on the Black Lives Matter movement, representation, and their roots.

“We talk about how knowing your roots is a very empowering thing that we sometimes take for granted,” Eskandarkah says, “At times it’s a luxury. As a Black person, I know a lot of guys that didn’t have that luxury.” 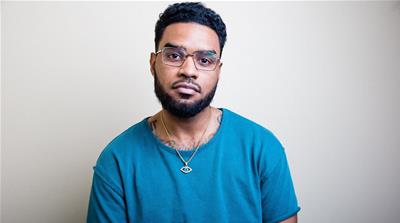 Based in Canada, Alex Eskandarkhah is a co-founder of the new collective [Al Jazeera]

His mother is Afro-Iranian from Abadan, and of Nigerian descent. He says spending time with that side of the family during his visit to Iran was a formative experience.

The Collective for Black Iranians is the first platform of its kind to cater to its demographic where the material will be featured in both English and Farsi, in an effort to challenge the current standard of representation.

Among the projects in the works is a multimedia piece made up of short snippets from Black and Afro-Iranian voices in the diaspora, titled Can You See Us?

The collective is determined to make their faces seen and their voices heard.

As one of its first posts reads, “We are part of the tapestry of what it means to be Iranian. If you look closely, you will see us.”