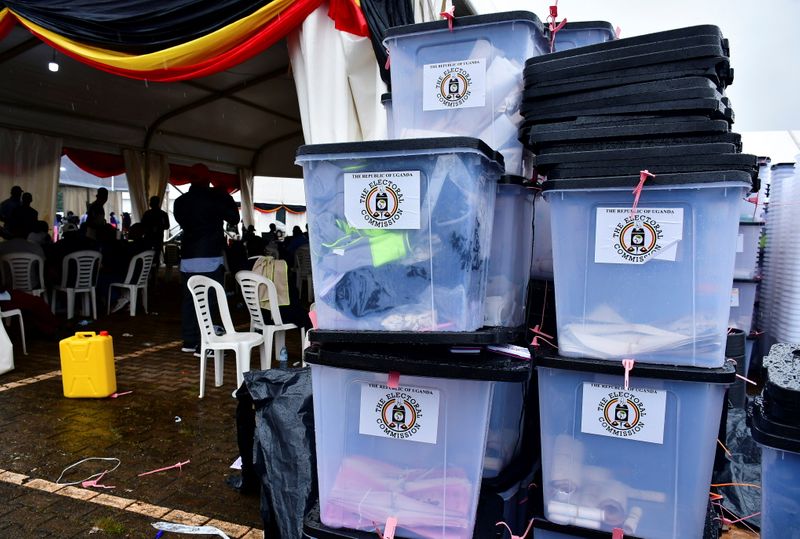 © Reuters. Ballot boxes and other electoral materials are seen at the Kampala tally centre, in Kampala

Security personnel and police were patrolling the capital, Kampala in large numbers on Saturday morning. Shops were open again after a two-day public holiday for the election. The government ordered the internet shut down the day before the election, and the blackout was still in place.

Wine, 38, had galvanised young Ugandans with his calls for political change after 35 years of Museveni, 76, ruling the country.

The run-up to the election was more violent than in previous polls. Security forces cracked down on opposition candidates and their supporters during the campaign, and more than 50 people died in protests in November on one of the multiple occasions when Wine was arrested.

Security forces had sealed off a wide perimeter around Wine’s sprawling compound on Saturday and told international journalists they were not permitted to enter, witnesses said.

Luke Owoyesigyire, deputy spokesman for Kampala’s metropolitan police, said he was unaware that reporters were being blocked and would make checks. It was not immediately possible to reach Wine for comment.

The singer-turned-lawmaker said on Friday that he was under siege and his life was in danger. Police said that they had merely boosted their deployment in his neighbourhood for his security.

Wine, whose real name is Robert Kyagulanyi, said on Friday he had video proof of voting fraud, and would share the videos as soon as internet connections were restored.

Electoral Commission Chairman Simon Byabakama told a news conference on Friday that under Ugandan law, the burden of proof rested with Wine.

The United States and European Union did not deploy teams of observers for this election, though the African Union and East African Community did.

Neither the AU or EAC observer teams responded to requests for comment about possible irregularities.

On Wednesday, the government ordered an internet blackout until further notice, a day after banning all social media and messaging apps.

Wine and his supporters used Facebook (NASDAQ:) to relay live coverage of his campaign events and news conferences after he said many media outlets had declined to host him.

The Electoral Commission has assured Ugandans that results are arriving at the national tallying centre, despite the internet blackout.

Ugandan media reported that at least 19 MPs from Wine’s National Unity Platform (NUP) had won their races in the parliamentary election, while the Forum for Democratic Change (FDC), previously the largest opposition party in the country, has so far won 17 seats.

The FDC won 35 seats in the 2016 election, but the NUP had no seats in the previous parliament – Wine was elected as an independent and joined the party last year.

Results from the parliamentary election, which are announced at the district not the national level, were still coming in.

What the Coronavirus Does to the Body

March 20, 2020
As the novel coronavirus infection known as COVID-19 continues to spread
Shop

‘Nomadland’ won, but not Oscar sure thing