New York City’s health commissioner has tendered her resignation, expressing “deep disappointment” following a tumultuous tenure that included clashes with the city’s police and mayor in the midst of the coronavirus pandemic.

Oxiris Barbot, a Yale-educated paediatrician, took over one of the country’s pre-eminent public health departments two years ago after holding a similar post in Baltimore. But she sparred with mayor Bill de Blasio over the city’s response to coronavirus as it became the epicentre for the pandemic earlier this year.

In a sign of their breach, Mr De Blasio recently handed responsibility for the city’s contact-tracing effort to its public hospitals — not the health department, which has handled such tasks in the past. In the weeks leading up to that announcement, Dr Barbot was rarely seen at the mayor’s side as he delivered his regular coronavirus briefings.

“I leave my post today with deep disappointment that during the most critical public health crisis in our lifetime, that the health department’s incomparable disease control expertise was not used to the degree it could have been,” Dr Barbot wrote to Mr de Blasio, according to The New York Times.

Her departure comes at a critical moment for the city’s public health department. Its school system — the nation’s largest — plans to reopen next month after being closed since March due to coronavirus. Mr De Blasio’s move to reopen schools has been highly controversial, with teachers protesting that it is unsafe. He has promised that the system will undergo rigorous testing.

Although Dr Barbot has faced public criticism — she was forced to apologise after reportedly telling the city’s police chief “I don’t give two rats’ asses about your cops” after he requested 500,000 masks she needed for health workers — experts said Mr De Blasio was partially to blame for the breach.

“New York City [has] one of the finest public health departments in the world, and it attracts top scientific talent,” said Mitchell Moss, an expert on urban policy at New York University. “The mayor is not comfortable with scientific expertise and ignored the sound advice of the health professionals at the department of health.” 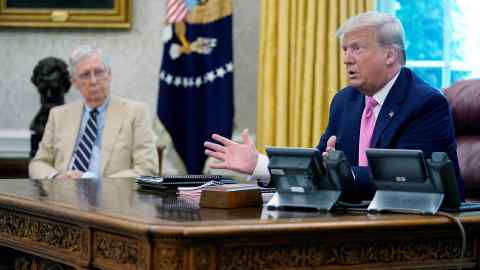 Dr Barbot is to be replaced by Dave Chokshi, a former executive at New York City Health + Hospitals.

Mr De Blasio praised Dr Chokshi for “fighting for those too often left behind”, saying: “Never has that been more true than during the Covid-19 pandemic, where he has helped lead our city’s public health system under unprecedented challenges.”

There have been more than 20,000 Covid-19 fatalities in New York City, but it has largely managed to bring the virus under control since cases surged in April and May.

However, there have been signs of rising cases in the neighbouring state of New Jersey, and experts worry that gatherings and the opening of city bars and other venues could lead to a resurgence.