All businesses in Maryland will be allowed to reopen with some capacity restrictions beginning Friday, Gov. Larry Hogan (R) announced Tuesday.

Hogan’s order to move into the third phase of reopening includes movie theaters and indoor concert venues, which will be able to reopen at a maximum 50 percent capacity, or 100 people, whichever is smaller.

Local governments will be allowed to keep the current restrictions in place for longer if they choose, Hogan said during a press conference.

The order is aimed at allowing more businesses to open for the Labor Day weekend, but Hogan cautioned that residents should not let their guards down.

“Moving into stage three does not mean this crisis is behind us, and we must remain vigilant, so we can keep Maryland open for business,” Hogan said.

Hogan’s roadmap for recovery does not include specific benchmarks for moving into different phases, but instead is based on testing capacity, contact tracing, supply of personal protective equipment and hospital capacity

However, Hogan said on Tuesday that the state’s infection statistics have improved in every county.

Hogan said the state has also seen a “continued and sustained drop” in the cases per 100,000 people, which is a metric many states are using as part of their travel restrictions.

On Tuesday, Hogan criticized schools for not taking any actions to plan for in-person learning and “basically saying the dog ate my homework.”

The state Board of Education on Tuesday voted to require school systems that haven’t developed a plan for returning to in-person instruction until 2021 to reevaluate their reopening plans and develop a hybrid model by the end of the first quarter. 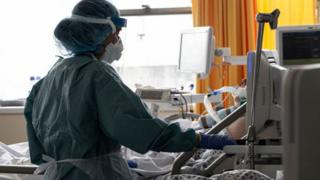