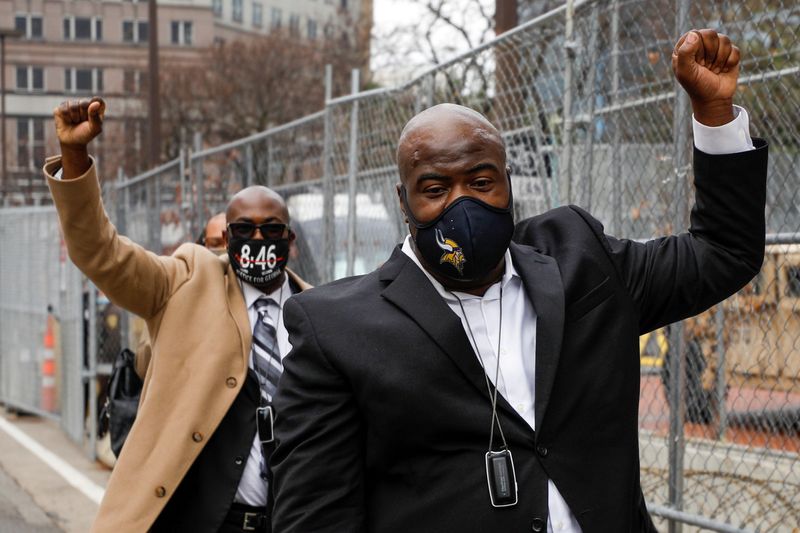 By Jonathan Allen and Joseph Ax

MINNEAPOLIS (Reuters) – Before resting their case in the murder trial of former Minneapolis police officer Derek Chauvin, prosecutors are planning to show the jury photographs of George Floyd as a younger man and question one of Floyd’s brothers, who is expected to recall Floyd’s close relationship with his mother.

The pictures and reminiscences are not intended to shed any light on the central question before the jury: whether Chauvin, who is white, committed a crime during his deadly arrest of Floyd, a 46-year-old Black man in handcuffs, when he knelt on Floyd’s neck for some nine minutes. Chauvin has pleaded not guilty to murder and manslaughter charges.

Instead they are part of a limited type of evidence allowed in criminal trials in Minnesota meant to show that a crime victim was not a faceless person but was “imbued with the spark of life,” as the Minnesota Supreme Court put it in a 1985 ruling.

Defense lawyers and some legal experts have long argued that there is good reason why Minnesota is unique among both U.S. states and the federal courts system in allowing testimony that has no bearing on whether a defendant is guilty. In most states, such accounts from a victim’s loved ones are usually heard only after a conviction, during a sentencing hearing.

“The ‘spark of life’ doctrine is controversial because it violates the foundational principle of relevance in evidence law,” said Ted Sampsell-Jones, a law professor at Mitchell Hamline School of Law in St. Paul, Minnesota.

In the 1985 case from which the doctrine and its memorable name are derived, a defendant convicted of killing a police officer said the prosecution unfairly prejudiced the jury against him by introducing evidence about the officer’s life and family. The Minnesota Supreme Court, the state’s top court, ruled that such evidence is allowed as long as it does not invoke undue sympathy or inflame the jury’s passions.

“You don’t want to go too far where the jury is just deciding things on raw emotion,” said David Schultz, a University of Minnesota law professor.

Schultz said he knows of no other state with a similar practice.

Hennepin County District Judge Peter Cahill, presiding over Chauvin’s trial, cautioned prosecutors that if Floyd’s brother, Philonise Floyd, describes Floyd as a “gentle giant,” for example, it could lead to his being grilled by Chauvin’s lawyer.

“Mr. Floyd in this case is entitled to have the jury realize he was a human being, he was loved, he had a family,” the judge said in a hearing before the jury was seated and began hearing testimony on March 29. “As soon as you start getting into propensity for violence or propensity for peacefulness, then we’re getting into character evidence.”

The judge has denied efforts by Chauvin’s lawyers to admit evidence about Floyd’s prior criminal convictions, including a violent robbery from 2007, saying they are irrelevant to the case. But Cahill said that could change if Chauvin’s lawyers argue that fairness demands they should be allowed to cross examine character claims made by Floyd’s brother.

Jurors have already heard from one person close to Floyd: Courteney Ross, who was Floyd’s girlfriend, testified through tears about their romantic walks and his love for his daughters. Ross also said she and Floyd struggled with opioid addiction.

The county medical examiner ruled Floyd’s death a homicide at the hands of police. The medical examiner also found fentanyl and methamphetamine in Floyd’s blood. Chauvin’s lawyers argue the cause of death may have been a drug overdose.

Matthew Frank, a prosecutor, assured the judge that Floyd’s brother would limit his testimony to recalling Floyd’s childhood in Texas, where he was a promising basketball player, as well as his aspirations and some of the struggles he faced in life.

Chuck Ramsay, a Minneapolis defense attorney who has seen “spark of life” evidence used against his clients, called the doctrine unfair.

“It is damning to the defense,” Ramsay said. “The line between undue sympathy for the deceased and prosecutorial misconduct is a thin one.”

Benjamin Crump, a civil rights lawyers representing the Floyd family, said he hopes testimony by Floyd’s brother would show the victim as a “person who would light up a room with a smile.”

“So often in these trials where the victim is a marginalized minority, nobody works to humanize that person,” Crump said. “He was loved and that there was something taken from us, taken from society, taken from the world.”