Afghan government representatives and Taliban members gathered on Saturday for historic intra-Afghan peace talks aimed at ending decades of war and conflict in Afghanistan that has killed tens of thousands of people.

Abdullah Abdullah, the chairperson of Afghanistan’s High Council for National Reconciliation, spoke about seeking a dignified and lasting peace at the formal opening of the negotiations in the Qatari capital Doha.

“I believe that if we give hands to each other and honestly work for peace, the current ongoing misery in the country will end,” Abdullah said, calling for a “humanitarian ceasefire”.

“[Afghanistan should] have an Islamic system in which all tribes and ethnicities of the country find themselves without any discrimination and live like brothers.” 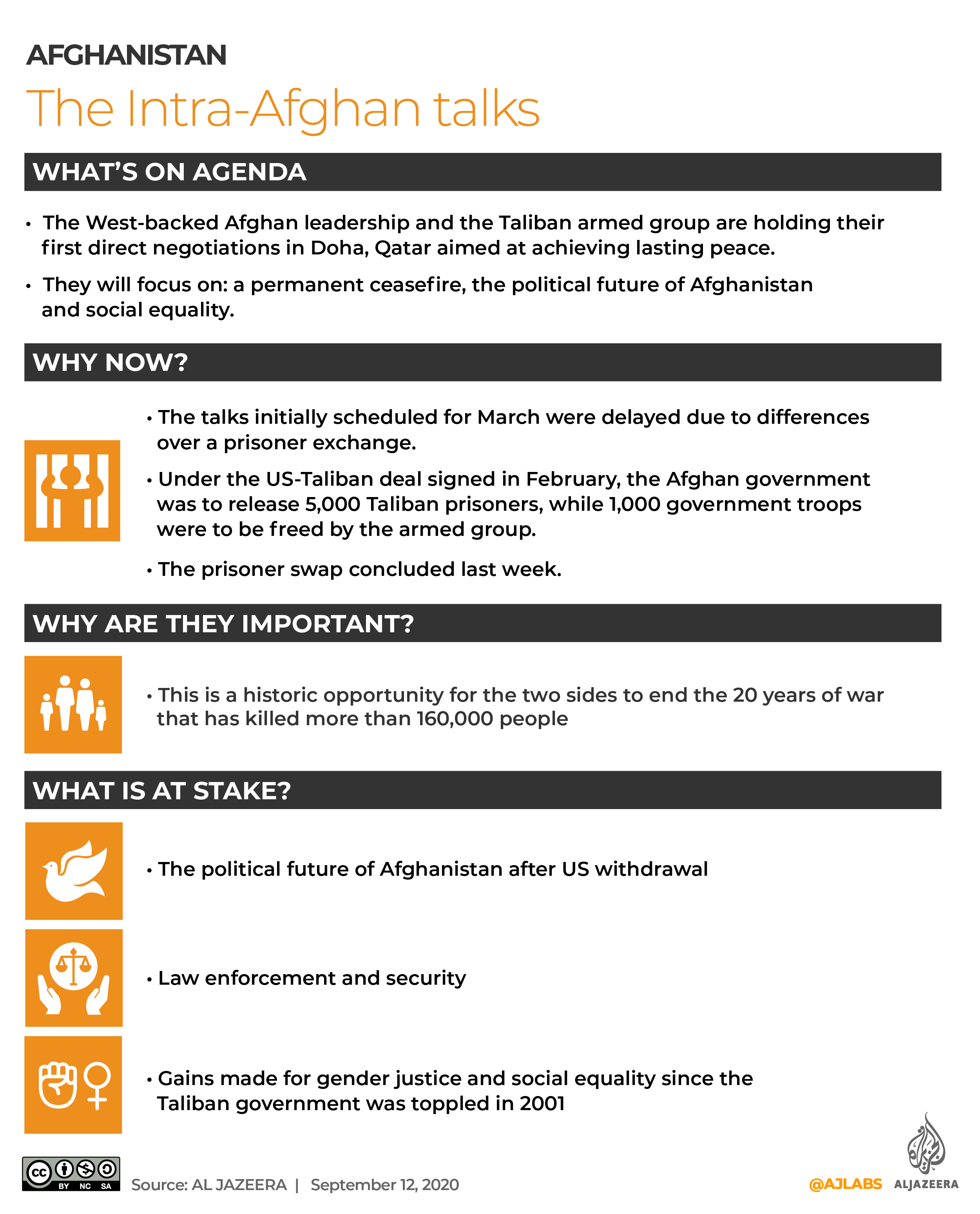 US Secretary of State Mike Pompeo urged the warring sides to seize the opportunity for lasting peace in Afghanistan.

“The choice of your political system is yours to make,” he said.

“We believe firmly that protecting the rights of all Afghans is the best way for you to break the cycle of violence.”

Achieving a permanent ceasefire would be on top of the list of issues, including women and minority rights, the sides would discuss during the negotiations.

The intra-Afghan negotiations were expected to begin in March but were pushed back because of a disagreement over a prisoners exchange made as part of the United States-Taliban deal signed in February.

In the agreement, the Taliban had agreed to release 1,000 Afghan troops, while the government said it would free 5,000 Taliban prisoners.

After months of delay, a compromise was reached by sending the last batch of six prisoners to Qatar. The prisoners arrived in Doha on Friday and will remain in custody there, clearing the path to the intra-Afghan talks.

It took almost six months to get the Taliban and the government to the negotiating table, and analysts said the challenging part is to get both sides to reach an agreement.

November 9, 2020
YouTube Music is taking another cue from Spotify with today’s launch
Funny

February 28, 2021
When her teaching assistant internship got

Can a job application fail due to bad grammar or spelling errors?

How To Start a T-Shirt Company