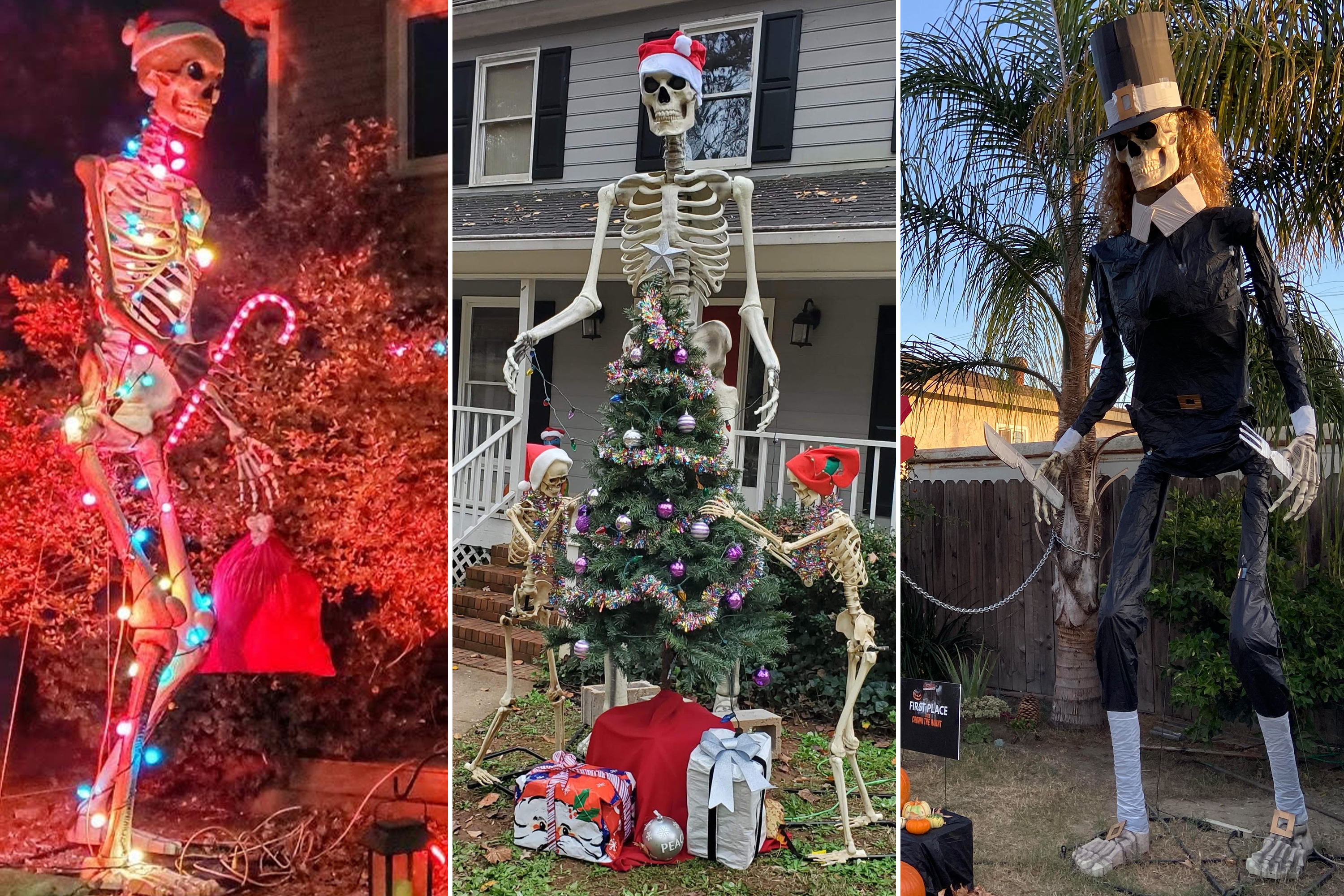 The lucky few who got their hands on Home Depot’s popular 12-foot-tall skeleton decoration — a $300 monster of a Halloween ornament that remains sold out in stores and goes for up to $1,400 on eBay — aren’t putting it away in its coffin until next autumn.

Instead, they’re giving St. Nick a real spook by repurposing the scary skeleton for their holiday decor.

“It became kind of a legend,” musician Thea Faulds, 47, said of her holly jolly giant, which is currently wrapped in colored lights with a Santa hat over its skull. She and her husband, Adam, purchased it in September and kept it in front of their home in Hamilton, Ontario — a Canadian city some 60 miles from Niagara Falls, NY — for their Halloween display, replete with lights and glowing pumpkins.

“People made a special trip to Hamilton to come see this skeleton so we thought, ‘Why not use it all year-round? Why not just totally do it up this year and give people something to come see?’ ” she said.

The spectacle is also practical: Keeping the big guy outside is easier than packing him up for storage in their small home, she said. “I guess we’re going to be doing it until somebody complains. Everyone seems to be really into it right now.”

In Los Angeles, stay-at-home mom and former funeral director Louise Pachella, 36, outfitted her skeleton with a head-to-toe Mayflower look, including knickers, shoe buckles and a tall hat for Thanksgiving.

The gruesome Pilgrim stands next to a model of a Tyrannosaurus rex who is outfitted as a turkey with feathers and a beak. The dino has taken up residence in Pachella’s yard since June and has seen his share of outfit changes this year. For Halloween, skeleton and dino were dressed as Elsa and Anna from the “Frozen” series, with the skeleton as Elsa and the T. rex — clutching an Olaf snowman between his fangs — dressed as Anna. Election Day saw the dino as Uncle Sam, bedecked in red, white and blue bunting.

“It’s fun to see how much people are appreciating my work,” said the crafty Pachella of passers-by, who fawn over the creations. “It’s great to see the joy because this year sucks so much … I just can’t bear to bring him down. He’s just so cool.”

The neighbors of Tracy Gilbert, 47, an administrator for a pharmaceutical company, who lives outside Atlanta are going to have to get used to the presence of her beast, which served as the centerpiece for a graveyard tableau around Halloween.

“He is going to be here to stay for a while,” she said.

The boos and cheers just may continue well past Christmas.

“We are flirting with the idea of making a top hat and a bow tie to celebrate the ringing in of 2021,” Gilbert said.

May 24, 2020May 24, 2020
Israeli Prime Minister Benjamin Netanyahu has arrived at a court in
Science/Nature

February 18, 2020
The Boy Scouts of America has filed for bankruptcy protection.Facing mounting

The 12 best Christmas songs to listen to this holiday season

‘Wish I could see your pretty lips’

The 17 best beauty gifts for makeup lovers this Christmas

Where to watch ‘A Charlie Brown Christmas’ on TV in 2020

How To Book The Cheapest Airfare Available, Every Time… By Journo Travel