The Boeing 737-800 passenger plane, bound for Kyiv, crashed minutes after take-off from the Imam Khomeini International Airport in Tehran on January 8, killing all 176 people, mostly Iranian nationals, on board.

Soleimani’s assassination by an adversarial foreign power temporarily created a sense of solidarity  across Iran, but that unity soon gave way to aggravated public resentment and fury at the incompetence and mendacity of a ruling system that falsely insisted on “technical flaws”, persistently prevaricated over the truth behind the Ukrainian plane crash, and kept it hidden from the people for three days.

“Many wonder if Tehran would have still come clean about the real cause of the plane crash had it not been for the pressure brought to bear on Iranian authorities by foreign governments such as Ukraine and Canada who lost citizens in the tragedy,” said Mitra Jafari, a student activist leader at Allameh Tabatabayi University in Tehran.

Iran, however, has denied allegations of a cover-up.

On Sunday, Major General Hossein Salami, commander-in-chief of the IRGC, said at a closed meeting in the Iranian parliament or Majlis that the defence establishment could keep hiding the truth if it wanted.

“We, ourselves, were the source of this hypothesis that our missile brought down the airliner,” Salami said. “If we had not broached it, nobody could notice [the real cause].”

The parliament, however, is unlikely to hold Iran‘s top security echelons, not least inside the IRGC, to account, even though rumours of high-profile resignations have been circulating in the Persian-speaking media, so much so that Iran’s Supreme National Security Council (SNSC) had to dismiss claims its secretary, Ali Shamkhani, had resigned.

“The parliament is still divided along factional and partisan lines: ‘principlist’ or hardline parliamentarians are generally commending the IRGC and its efforts to protect Iran’s national security while ‘reformists’ or moderates are expressing dissatisfaction with its performance and have been urging resignations of its top commanders,” said Milad Alavi, the Iranian daily Etemad’s parliamentary correspondent.

“The Majlis is far off from the street, with some MPs even raising questions whether it would make a difference to have or not to have a parliament in the country.”

Perhaps this partly explains why protesters, who took to the streets in other cities as well, have directed their ire at the entirety of the Islamic republic, which they increasingly believe has dismally failed them.

“[Whether] reformist [or] principlist, the game is over” was one of the slogans demonstrators shouted, echoing doubts about the viability and legitimacy of the ruling system, divided as it has conventionally been into two broad political camps, hardline and moderate.

In a damning statement, the Association of Tehran Journalists lamented: “We are holding a funeral for the public trust [in the political establishment and the status quo].”

Other popular slogans were more direct, specifically intended to hammer home the point that the Iranian leadership is facing a worsening crisis of functionality and legitimacy: “Our stigma, our stigma; our dumb leader”, “Incompetent leader; resignation, resignation”, “Commander-in-Chief of all forces; resignation, resignation”, “Don’t call me a ‘seditionist’; you oppressor are the sedition,” “Referendum, referendum; that’s how to rescue people”, and “Death to the principle of Guardianship of the Jurisprudent”.

“Velayat-e Motlaghe-ye Faqih” – or Absolute Guardianship of the Jurisprudent – is a doctrinal principle that constitutes the ideological foundation of the Islamic republic and elevates the supreme Leader to the status of God’s representative on Earth in the absence of Imam Mahdi, the 12th Shia Imam who is believed to be in hiding and expected to reappear and save the world.

Mehdi Karroubi, a Green Movement opposition leader under house arrest since February 2011, declared in a public statement that Supreme Leader Ali Hosseini Khamenei is not qualified for leadership.

“If you were aware [of the plane crash disaster] and yet allowed military, security and propaganda officials to deceive people … undoubtedly, you lack any of the required qualifications for leadership according to the constitution,” Karroubi wrote.

“And if you were not aware”, he continued, “please tell us what kind of ‘Commander-in-Chief of all forces’ you are, whom they [military officials] play around”.

In a similar vein, Faezeh Hashemi, daughter of Iran’s late former president Akbar Hashemi Rafsanjani, inveighed against Khamenei’s method of governance and called on him to step down.

A number of protesters in Tehran even voiced slogans against Soleimani, whose death became a symbol for many of the dangers Iran is facing from outside, and tore down the posters hoisted to commemorate him.

“This wave of protests seemed to be different from the previous ones, in that the scope of demands, their nature and their targets were more explicitly foundational,” Jafari said.

While protesters rejected the ruling elite and some went as far as to shout, “Our enemy is here; they lie that it is America”, others were determined to reject Iran’s monarchist opposition abroad that has supported Washington’s “maximum pressure” campaign against Tehran and has lobbied for regime change at any cost.

“One of the resounding slogans voiced by demonstrators was ‘Either it be the shah or the leader; death to the oppressor’, which somehow contested the overseas-based pro-Pahlavi opposition’s claims to massive popularity and legitimacy,” a civil rights activist in Tehran told Al Jazeera on the condition of anonymity. 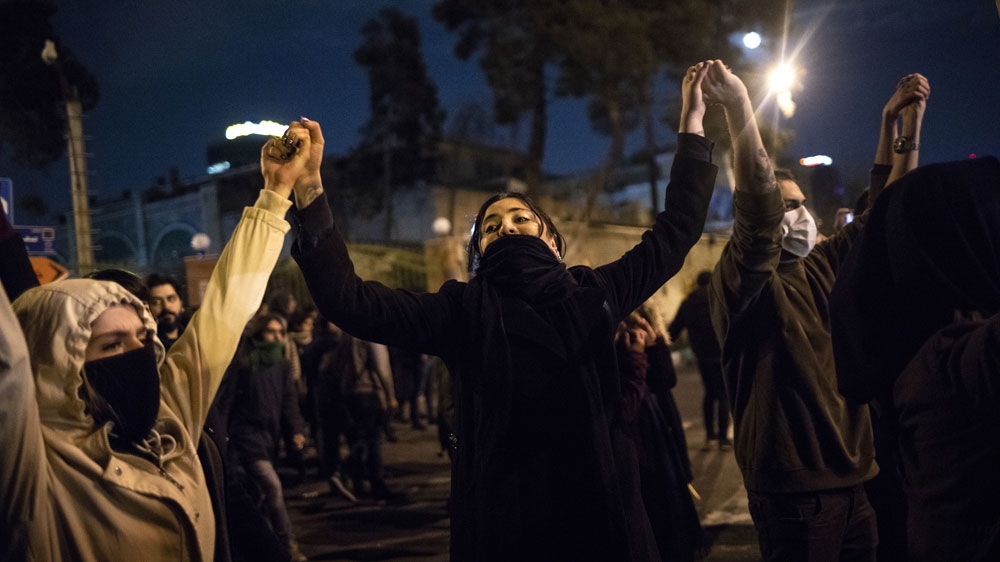 Slogans in favour of the pre-revolutionary regime led by Reza Pahlavi, the exiled son of Iran’s former Shah, were also quite conspicuous by their absence, compared to recent waves of nationwide turmoil.

Notably, as anti-regime demonstrations raged on across Iran, US President Donald Trump – who notoriously banned Iranian nationals from entering the US on “terrorism” grounds – posted his first Persian-language tweet in support of the protesters.

He posted an English translation of it earlier.

“I’ve stood with you since the beginning of my Presidency, and my Administration will continue to stand with you,” part of the message read, provoking critical reactions from many observers who highlighted his administration’s crippling sanctions on Iran, with cataclysmic consequences for ordinary citizens.

Trump also recently threatened to destroy Iranian “cultural sites” if Tehran retaliated against the US for the assassination of Soleimani.

Another feature of the anti-regime demonstrations was protesters’ deliberate refusal to resort to violence, despite the heavy-handed tactics used by security forces to crack down on them.

“Unlike the previous waves of unrest, protesters almost entirely refrained from perpetrating acts of vandalism and sabotage, not even setting dumpsters ablaze,” the civil rights activist said.

The plane crash turmoil was arguably fuelled by the still-fresh grievances and growing resentment lingering from the unprecedentedly violent protests in November over the government’s abrupt decision to increase fuel prices.

According to Amnesty International, at least 304 people were killed in the bloodiest state repression of popular protests since the 1979 revolution, even though the real death toll is likely much bigger.

Notably, the government has not yet revealed the exact number of deaths, and the whereabouts of some of those detained back then are still unclear.

Despite the fragmentation and polarisation of Iranian society along various social and political lines, perhaps the common denominator of these protest waves is an emphatic rejection of how the Islamic republic has been governing Iran, and increasing demands for accountability from its leaders.

“The significance of these new protests lies in the potential emergence of a cross-class movement against the ruling system that includes working and middle-class Iranians alike, relatively better-off urban dwellers, as well as poorer citizens living in towns and outskirts of cities,” said Arang Keshavarzian, associate professor of Middle Eastern Studies at New York University and author of Bazaar and State in Iran.

“What unites Iranians of all classes and even political persuasions is their criticism of the incompetence and ineffectiveness of the state.”

Guido Badano, a Hero of the Andrea Doria Crash, Dies at 92

November 13, 2019
A court in South Korean on Wednesday began
US & World