Facebook said it has taken down new disinformation campaigns, including one carried out by the Russian group accused of meddling in the 2016 election and another linked to US public relations firm CLS Strategies.

The takedowns come as social media platforms battle increased online political interference ahead of the US presidential vote later this year.

Facebook on Tuesday said it pulled a small network of roughly a dozen accounts linked to Russia’s Internet Research Agency — the group charged by US prosecutors for attempting to manipulate voters on social media platforms in the 2016 US presidential election — following a tip from the FBI.

According to Facebook, the IRA created a fake leftwing news outlet, as well as online personas with computer-generated photos to post on divisive topics, such as the QAnon conspiracy group.

The news outlet was identified as “Peace Data”, according to a sister report published by research group Graphika. The group’s website remained online at the time of publication, which states that its mission is to “shed light on the global issues and raise awareness about corruption, environmental crisis, abuse of power, armed conflicts, activism, and human rights”.

Graphika said the “operation suggests an attempt to build a leftwing audience and steer it away from Biden’s campaign”.

The operatives “posed as news editors from various countries, including the US” and “recruited unwitting freelance journalists”, Facebook said. According to Nathaniel Gleicher, the social network’s head of cyber security, the group posted adverts in public online forums seeking writers, thereby co-opting US citizens to create content and amplify their messaging.

They also “sought to obtain political advertising authorisation to run ads in the US, including through unwitting users”. Facebook said the campaign was curbed in the early stages of building its audience.

Twitter also said it had “suspended five Twitter accounts for platform manipulation that we can reliably attribute to Russian state actors”, which also belonged to Peace Data.

Separately on Tuesday, Facebook said it had taken down a campaign run by US communications firm CLS Strategies, likely on behalf of others, targeting Venezuela, Mexico and Bolivia.

This included “content in support of the political opposition in Venezuela and the interim government in Bolivia, and criticism of Morena, a political party in Mexico”, Facebook said.

CLS used a network of dozens of fake Facebook accounts and pages, followed by more than half a million users, which posed as political fan pages, civic groups, news entities and locals, according to the social network.

Some impersonated political parties, by using “typosquatting” — creating fake websites with names spelt slightly different from legitimate ones in the hope that internet users will not notice. The campaign spent $3.6m on ads, Facebook said.

CLS has represented clients including US investment banker Frank Quattrone, IBM, Cisco and the UN, as well as some political campaigns in Latin America, according to its website.

The report highlights the increase in so-called “influence for hire” operations, where groups hire third parties, often communications or marketing firms, to carry out covert information warfare on their behalf, which serves to mask their identity.

An increasing number of disinformation takedowns by Facebook have been linked to third-party groups, although Tuesday’s action marks the first time a well-known communications firm in the US has been linked to such activity. 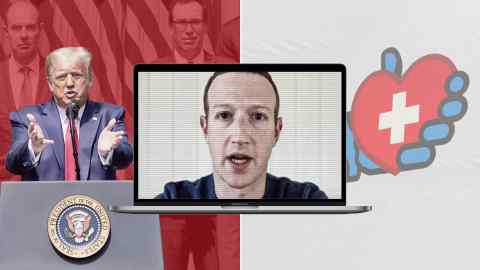 Facebook’s Mr Gleicher said the company was not fully banning CLS Strategies from its platform because it also carried out a “large portion of legitimate activity that isn’t designed for this purpose”.

CLS Strategies could not immediately be reached for comment.

The disclosures come as politicians in Washington wrangle over foreign interference ahead of November’s US presidential election.

At the weekend, John Ratcliffe, the Trump-appointed director of national intelligence, informed congressional leaders he would no longer lead in-person briefings on election security, prompting outrage among Democrats, who accused the Trump administration of trying to conceal Russian interference.

Nancy Pelosi, the Democratic speaker of the House, and Adam Schiff, the Democratic congressman who chairs the House intelligence committee, wrote to Mr Ratcliffe demanding that he reinstate the briefings, adding that if he did not, they would have “no choice but to consider the full range of tools available to compel compliance”.