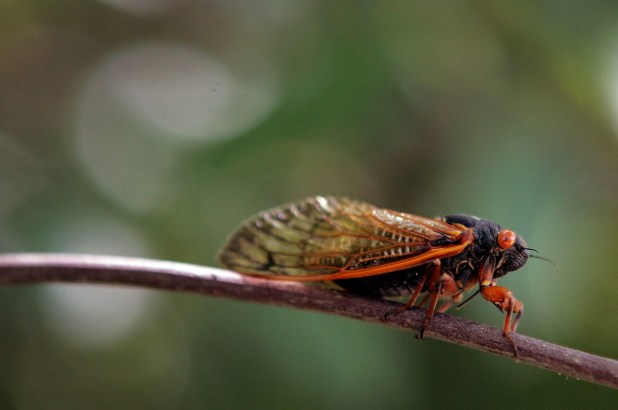 Indeed, starting this spring, millions of these Brood Xers — one of the largest broods of these winged, black insects in the US — will likely be surfacing in 15 states: Delaware, Georgia, Illinois, Indiana, Kentucky, Maryland, Michigan, North Carolina, New Jersey, New York, Ohio, Pennsylvania, Tennessee, Virginia, West Virginia, along with Washington D.C.
Getty

They’re back from their decade-plus-long dirt nap.

After lying dormant for nearly 20 years, the cacophonous 17-year cicadas will soon emerge from their subterranean slumber pods, ready to bring their “head-splitting” noise to the East Coast.

“The end of May through June, it can get pretty loud,” said Howard Russell, an entomologist at Michigan State University, told USA Today of the groundbreaking phenomenon.

The winged, black insects are classified in “broods” according to when they emerge from underground and raise hell. This spring, we’ll be hearing from millions of Brood Xers — one of largest broods in the US — who will likely be surfacing in 15 states: Delaware, Georgia, Illinois, Indiana, Kentucky, Maryland, Michigan, North Carolina, New Jersey, New York, Ohio, Pennsylvania, Tennessee, Virginia and West Virginia, along with Washington, DC. So much for escaping NYC’s rampant noise pollution during stay-at-home orders.

This marks the first time this particular batch of cyclical critters have seen daylight since 2004. Between stints on the surface, the cicadas hibernate beneath the forest floor for 13 to 17 years, subsisting on sap from tree roots — a far cry from annual cicadas, a species that emerges every summer.

“They are always there, that’s what people don’t realize,” said John Cooley of the University of Connecticut who runs the Periodical Cicada Mapping Project, adding that “the noise is just head-splitting” when they unearth themselves.

It’s still unclear what force of nature compels these bugs to go above ground right on schedule — perhaps they possess an internal “cicadian rhythm.” But once here, they blanket tree trunks and limbs in preparation for the last stage of their life cycle.

Adult cicadas will crawl out of their chrysalis with new wings, whereupon males will spend the next month or so belting out their ear-splitting siren song in an attempt to attract a mate. Their adult lives are short, and by the start of summer, the lion’s share have already reproduced and died.

Eggs hatch a couple months later, after which the juvenile cicadas, called nymphs, burrow down into the ground to begin the cycle anew.

Despite growing up to 2 inches long, these periodical pests don’t pose a threat to humans. However, their 90-decibel mating call — which is as loud as a lawn mower — can prove quite a nuisance given their biblical swarms.

Meanwhile, females prep for egg-laying by carving out impromptu incubation chambers in soft twigs using a sharp organ called an ovipositor. This can kill young branches, in turn decimating baby trees and orchards.

To make matters worse, “you can’t spray enough pesticide to kill them all without also wiping out everything else in the environment,” said Cooley.

Experts advise mitigating the damage to plants by placing nets, bags or other insect-deterring items over trees from May until July. Meanwhile, a few intrepid epicureans have even resorted to eating the arthropods — as they have the murder hornet — like buggy bar snacks.

Unfortunately, that there are a whopping 15 species of periodical cicadas means one scourge or another ascends above ground nearly every year. This past spring, millions of Brood IX cicadas — which had last emerged in 2003 — blackened the skies around North Carolina, Virginia and West Virginia like a rowdy plague of locusts.

Who won the NASCAR race yesterday? Complete results from Michigan

August 9, 2020
In ways both literally and figuratively the NASCAR Cup Series field
Gossip

October 16, 2020
Cardi B has confirmed that she has reconciled with husband Offset,
US & World

US coronavirus: Maine wedding is linked to the deaths of 7 people who didn’t attend

September 16, 2020
As officials continue to push preventive measures, such as wearing masks

Al Pacino appeared to be asleep at Golden Globes 2021